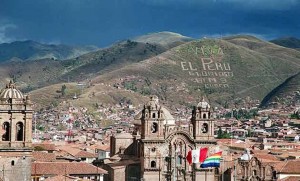 Cuzco, (or Cusco / Qosqo) is situated in the heart of the Inca empire, high in the Peruvian Andes, and is for most, the gateway to Machu Picchu. Cuzco is a vibrant and bustling city with a staggering amount of history and linkage to the ancient Inca civilization, which is one of the reasons it is UNESCO World Heritage listed. The city is lined with exquisitely engineered cobble stoned streets and walls, juxtaposed against more recent (historically speaking!) Baroque cathedrals and churches from the Colonial period. It’s hard not to be swept away by the historical significance and intrigue of Cuzco, but if that’s really not your thing, the city is full of culture and art – take the picturesque neighbourhood of San Blas for example, where the best artisans have set up their workshops.

These ruins are a short walk up a steep hill overlooking the main Plaza and Cuzco Valley. The ruins, often referred to as a fortress, it is believed to have been built to protect Cuzco, but also as a site for ritual ceremonies. The fortress is made of large polished dry stone walls, with boulders carefully cut to fit together tightly without mortar. The structure is built so precisely that you can’t even fit a piece of paper between the inter-locking stones and this has helped the ruins survive earthquakes over the centuries. Amazingly, pottery collected at this site indicates occupation dating back at least a millennium!

Still wondering about things to do in Cuzco? Check out this comprehensive guide: http://activeadventures.com/blog/2013/09/active-adventures-guide-to-cuzco/